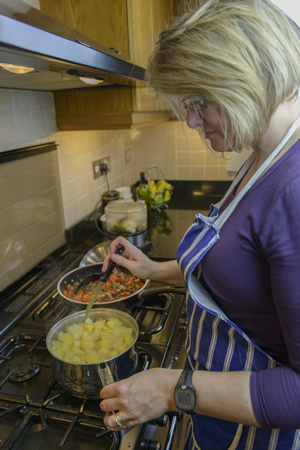 If you have mains gas and electricity at your home you have the choice of an electric cooker or a gas cooker – But which is best?

Many people choose the type of cooker based on what they have had before. Some people swear by an electric and would never consider anything else and others feel the same about gas.
So here are some consideration to help you make an informed choice about the cooker that’s right for you.

To give you a rough idea if you use your cooker for an 80 minutes a day then over a year a gas cooker will cost less than £20 to run compared to an electric cooker which will cost more than £50.  This is a £30 saving each year which over say a 10 year life of the appliance would be £300.

Whichever type of cooker you have its well worth comparing energy prices to make sure you get the best deal for your gas or electricity.

It’s not just about money when comparing types of cooker as there are some considerations that are worth bearing in mind.

If you have solar panels then you may be generating spare electricity when you cook, especially in the summer months.  This means that this ‘free’ electricity could help offset the additional costs of running an electric oven [more about solar]

Gas appliances have to, by law, be installed by a GasSafe registered engineer and the costs to install will be higher than an electric oven.  You should also check that you have the required points in place for your chosen fuel.

Often a good choice to get the best of both worlds is to have cooker that has a gas hob and an electric oven.